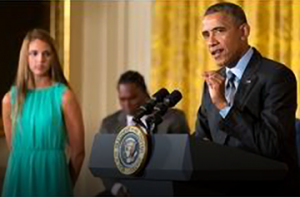 As you saw in my post last week, my wife, Lisa, and I were invited to attend President Obama’s Healthy Kids & Safe Sports Concussion Summit at the White House on May 29. We were invited for several reasons and were able to bring together all of our passions, including our work with The Matthew Gfeller Foundation, UNC’s Matthew Gfeller Sport-Related TBI Research Center, and my role as executive director of the Childress Institute for Pediatric Trauma. At the end of my post are a few commitments these organizations have made in response to the President’s summit.

The power of the Presidential position brought a large team of people to the White House that are interested in positively impacting this invisible threat to our kids – medical professionals, sports advocates/players (football, soccer, hockey, etc.), parents and other family members, corporate supporters, the military, media and others.

The first speaker was Tori, a high school soccer star with an opportunity to attend college and continue playing her sport. Unfortunately, the effects of initially unrecognized and repeated concussions meant Tori’s dream of playing soccer in college is over, but she is working hard to recover and remains active in sports by teaching young children how to play soccer. She eloquently told her story and introduced the President, which allowed him to reference her experience as an example to other young athletes and parents about the commitment ahead of us to change perceptions and improve outcomes.

“We’ve got to have better research, better data, better safety equipment, better protocols,” said President Obama. “We’ve got to have every parent and coach and teacher recognize the signs of concussions. And we need more athletes to understand how important it is to do what we can to prevent injuries and to admit them when they do happen. We have to change a culture that says you suck it up. Identifying a concussion and being able to self-diagnose that this is something that I need to take care of doesn’t make you weak — it means you’re strong.”

The President shared a very powerful and balanced message:  our kids want and need to play sports to be productive. The collective “we” at the summit need to invest all we can, including treasure, talent and time, to insure that they play safely. Sports and recreational TBI are the invisible epidemic that demands attention right now across the board. Did you know that 70 percent of the U.S. football-playing population is younger than 14? Many people are talking about the NFL, but kids make up the majority of players and they are vastly understudied. It’s vital that we research ways to improve outcomes. Until then, “when in doubt, sit it out,” and keep yourself informed.

The effort required is huge, but we must lead and move with coordinated speed. Thanks for helping us share this initiative.

The Childress Institute funds research to improve the treatment for critically injured children in the U.S., including an ongoing study to measure head impacts that youth sustain while playing football. The published results from 2013 comprised 111 youth football players ages 6 to 18 – the largest ever conducted. Players received an MRI before and after the football season, and also wore helmets instrumented with sensors to measure head impacts during practice and games. We will continue this study to determine short- and long-term effects, and next steps.

We have developed an innovative behavior modification program aimed at reducing the risk of sports-related concussion in high school football athletes. This fall we will study the intervention by employing a two-pronged approach in several North Carolina High Schools: 1) quantitatively capture head impact biomechanics using accelerometer systems to identify at-risk player profiles, and 2) employ a clinician-coach-player mentorship approach to affect change in playing techniques to reduce risk of concussions.

The Matthew Gfeller Foundation (MGF) was founded in 2009 after the death of our son who sustained a catastrophic TBI during his first high school varsity football game in August 2008.  Matthew’s injury was caused by a severe helmet to helmet hit and he never regained consciousness. The Matthew Gfeller Foundation’s mission is to help prevent, recognize, and treat youth sports head injuries. The MGF works to raise awareness and fund research and treatment centers through a variety of community based programs. The MGF supports the following organizations in furtherance of its mission: The Matthew Gfeller Sports Related Traumatic Brain Injury Research Center at UNC-Chapel Hill, The Childress Institute for Pediatric Trauma at Wake Forest University, and the high school athletic trainers of Forsyth County, NC.