During Teen Driver Safety Week, Discuss the “5 to Drive” 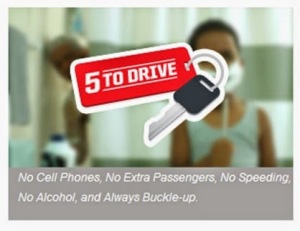 For many teenagers, getting a driver’s license is an important rite of passage. For parents, however, it can be a time of concern.

It’s no small matter to hand the keys of a two-ton vehicle over to a son or daughter who not that long ago was having their training wheels taken off their bike. It’s particularly worrying when you know that motor vehicle crashes are the number one killer of 14- to 18-year-olds.

But rather than worry, be ready: use Teen Driver Safety Week, which starts on Sunday and runs through October 25, as a time to set some ground rules. We call these rules the “5 to Drive,” and they might just save your child’s life. We’re asking parents and guardians to discuss these five basic rules for safe teen driving:

We need parents to discuss the “5 to Drive” with their young driver because these dangerous driving behaviors are what is claiming young lives on America’s roadways. We need teens to take these rules seriously. That will only happen if parents establish these ground rules with their children—and back them up with a zero-tolerance policy. Unsafe driving means no driving. That’s a promise you should make to your child because it’s a promise that will keep them safe and that they will take seriously. After all, no teen with a driver’s license wants to end up back on the school bus because mom or dad took away the car keys.

Whether it’s drunk or distracted driving, not wearing seat belts, or speeding, we need to redouble our efforts to help our nation’s young people make the right choices—as drivers and passengers. So let’s get the safety conversation started. Use the “5 to Drive” and set the rules before your teens hit the road.  And then keep the conversation going.

Adults, control the keys. “5 to Drive” is a message that needs to be reinforced again and again.