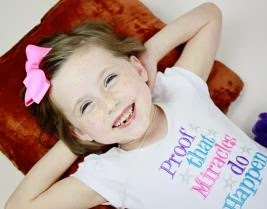 Lara received the call that every mother dreads. Someone from a hospital far away woke her at 6 a.m. to deliver the news that her six-year-old daughter, Preslee, had been seriously injured in a car accident while visiting family near Winston-Salem, N.C. She was taken to the Level I Pediatric Trauma Center at Wake Forest Baptist Health Brenner Children’s Hospital for treatment. Preslee’s injuries were extensive: fractured skull; broken leg, arm and wrist; collapsed lungs; lacerated liver; thoracic vertebra compression fractures; and torn neck ligaments.

While Lara flew from Texas to North Carolina, Dr. Kristen Zeller performed a life-saving emergency bedside surgery on Preslee’s abdomen a few hours after she arrived in the hospital. Once Lara arrived at Brenner Children’s, she was told Preslee was unconscious and on a ventilator to breathe. They had to take it one hour at a time.

Over the next few weeks, Preslee received several more surgeries to repair her broken bones, along with the full care of the pediatric trauma staff for her other injuries. After almost a month at Brenner Children’s, Preslee began to heal and was able to travel home with her mother. She received follow up care at Texas Children’s Hospital in Houston. After only four months, Preslee is out of her casts, neck brace and other protective gear, including her wheelchair, and has started first grade. Although Preslee and her family still have some healing to do, her recovery has been stellar and she has even resumed gymnastics!

Preslee’s success is due in large part to the highly-skilled and prepared pediatric trauma health care providers that were available at an American College of Surgeon’s certified Level I Pediatric Trauma Center, one of about 40 in the U.S. We can all help save more injured kids by supporting efforts to increase trauma readiness with EMS, nurses, doctors and other care in every state.