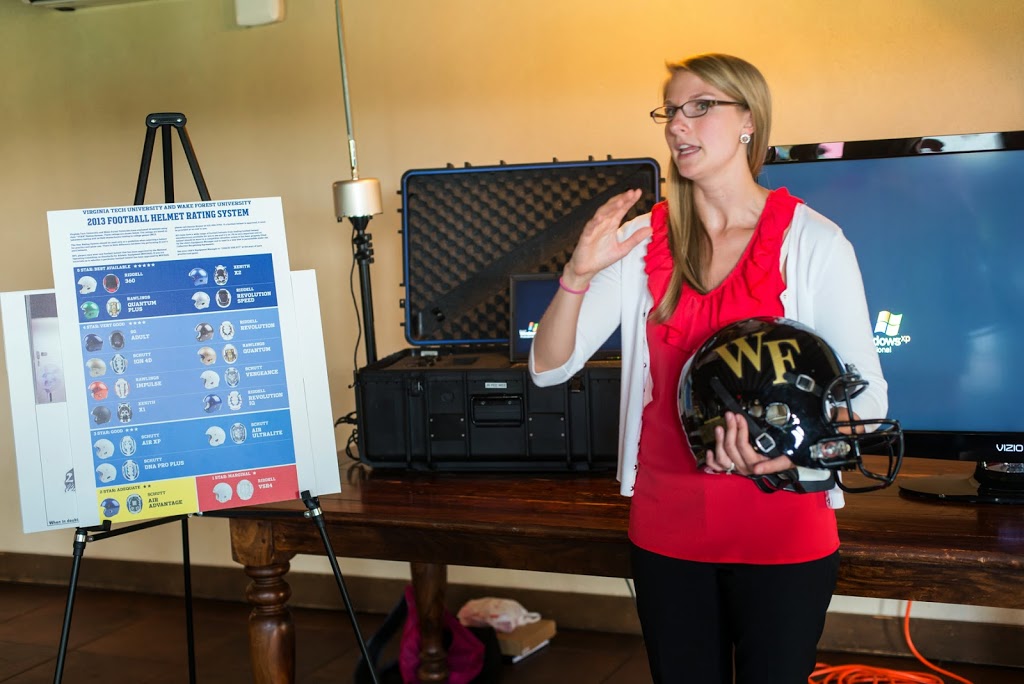 How many of you have kids who play soccer, football, hockey, basketball? Have any of you had a concussion or know someone who has had a concussion, particularly a young athlete? Many of your may know that concussions are an important topic at the moment. Head injuries commonly occur in football, but they also occur in many other sports including soccer, lacrosse, cheerleading, and basketball.

The Childress Institute for Pediatric Trauma funded the pilot study with The Center for Injury Biomechanics at Wake Forest University , and we have been working together for several years. In that time, the Institute has provided us with over $500,000 to support medical image data collection to collect head impact, neurocognitive, and imaging data from 147 youth and high school athletes. We have collected tens of thousands of head impacts and medical images on a larger scale than has ever been attempted. This work has allowed us to apply for and receive a grant from the National Institutes of Health worth $3.5 million to continue this study in youth players for the next five years. The focus of our study is on football but there are many opportunities to study head injuries in other sports, helmeted and non-helmeted, as well as in boys and girls.

Other researchers have studied professional and college football for the past 10 years. There are only 2,000 NFL players and 100,000 college football players, one NFL player for every 50 collegiate players. However, these statistics are just the tip of the iceberg. There are approximately 1.3 million high school football athletes (ages 14-18) and 3.5 million youth athletes (ages 6-13). That is 1,750 youth football players for every NFL player. We have a tremendous number of youth athletes in this youngest age group, and it is the age group about which we know the least.  Young children’s brains are growing and developing so one of the questions we are asking is – what happens to the brain of a young athlete who has 100, 500, or even 1,000 impacts over the course of a football season? What can we do to avoid or mitigate these impacts?

We commonly think of exposure when we are talking about sun exposure.  We can apply this concept to head impacts where the concussion is a single bad event, similar to a sun burn, and a season or lifetime of impacts is analogous to a lifetime in the sun. Much of the focus of researchers for the past 10 years has been on the concussion – something that might happen once or twice over the course of a career.  However, the question at hand is what has a greater effect on the brain: a few concussions or a season or a playing career of subconcussive repetitive head impacts?

We are studying this using two methods. Before, post-concussion, and after the football season we collect medical imaging and neurocognitive data. The kids participating in the study come in for an appointment at the hospital where we perform a computer-based test that measures how fast they think and how well they remember things. We collect medical imaging data including a magnetoencephalography scan, or MEG, which listens to their brain – specifically the magnetic activity of the brain and an MRI, which takes different types of pictures of the brain but with no radiation. These together allow us to measure the functional activity of the brain, along with the structure of the brain.

In between the pre- and post-season scan, they practice and play football. We instrument the helmets of youth and high school football players with a sensor system that fits in the existing helmet. The sensor system sits on the crown of the head of the athlete and wirelessly transmits each head impact to a sideline laptop during all practices and games. We are measuring the location of impact on their helmet and the acceleration, representing the severity of the hit in terms of Gs. We use this data to better understand head impact exposure on the field in order to better inform safety on the field, helmet safety, and to better understand age-specific injury risk and injury mechanisms. Our imaging collaborators measure changes in the brain from the MRI and MEG and are looking to see if they correlate to the number and magnitude of impacts they have received.

We have found that many of our athletes are receiving a greater percentage of their head impact exposure during practices compared to games, which is something our players and coaches have direct control of through modifying practice drills and limiting the number of contact practices. Additionally, by studying two different groups with different league rules on contact practice with our partners at Virginia Tech, we have found that one league significantly reduced the head impact exposure of the athletes without affecting how hard they hit during games.

The study has many opportunities to go beyond youth and high school football. There is a lot we do not know about female athletes and even non-helmeted sports such as soccer where we see a high incidence of concussion. The results of this study will help us to better understand how to reduce head impact exposure and ultimately keep our kids safe.