Don’t Give Up Until They Buckle Up 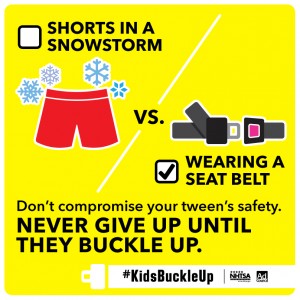 When she was a baby, you put her in a car seat. In a few years, you’ll insist she buckle up when behind the wheel. Today, however, she’s a tween; she’s tired of hearing mom and dad nag her about wearing her seat belt. And you’re a little tired of saying it.

But this is the fight worth having. Your tween’s life is at stake.

And that’s why DOT and NHTSA have launched our “Never Give Up Until They Buckle Up” campaign.

Never Give Up Until They Buckle Up engages parents to ensure that children and young people ages 8-14 consistently and properly wear their seat belt every time the car is moving. As our new ads tell parents: “You’re the driver. The one in control. Stand firm. Just wait. And move only when you hear the click that says they’re buckled in for the drive.” We hope you’ll check our new campaign’s web site and accompanying video.

Traffic safety data tells us that, as children get older, they’re less likely to buckle up. Over the past 5 years, 1,552 kids ages 8-14 were not wearing seat belts when they died in a crash, and one in four of those kids were age 14. Our friends at the Childress Institute understand that this is a trend that we need to reverse until every young person is buckled up for every ride.

This campaign is urgently needed because—as many parents can attest—seat belt use often falls by the wayside during the hectic shuttling of kids to and from school and activities, when running short errands, or when parents are a bit worn down by the daily grind.

A recent series of NHTSA focus groups found these among the reasons for failing to ensure that tweens are wearing seat belts.

And of course, tweens will test limits. It’s how they learn and grow. That’s why it’s so critical that they absorb the message now: the car doesn’t move until everyone in the vehicle is buckled up. After a while, it won’t be a fight; it will be second nature, a lifesaving lesson that they’ll carry with them always.

Put this plan into action with your own tween. And please–wherever and whenever you can– share this important safety message with other parents: Never Give Up Until They Buckle Up.