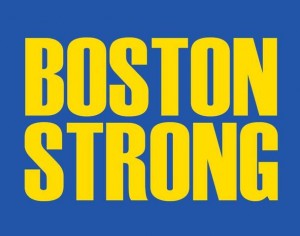 Like most memorable events, we are easily reminded of the 2013 Boston Marathon bombings by things big and small. Whether it’s something said or by what we were doing at the time of the incident. The 2015 Boston Marathon is around the corner and immediately, the 2013 bombings pop into my mind. What normally would be a date to put in the calendar with other holidays and hopes for nice weather now brings back a flood of emotions and memories.

The Boston Marathon is always on Patriot’s Day, the third Monday in April. It’s a civic holiday to commemorate the first two battles of the American Revolution: Lexington and Concord. In 2013, the 117th anniversary, with almost 27,000 runners and half a million spectators along a 26.2 mile course, the unthinkable happened. The City of Boston experienced a terrorist attack involving two separate improvised explosive devices (IED) loaded with nails and metal “BB’s.” These IEDs were detonated nearly simultaneously at ground level at two different crowded sites near the finish line. These explosions created a Mass Casualty Incident (MCI) on a scale not seen in Boston since 1942, when the Cocoanut Grove nightclub fire killed 492 and injured hundreds.

At 2:50pm on April 15, 2013, the City’s incident commander activated the MCI, notifying the surrounding trauma centers. Boston EMS, police, bystanders and runners all responded. The Boston metropolitan area is a densely populated medical community. The medical presence that day was vast; spectators, runners, volunteers and those staffing the medical tents located only 150 feet away, instinctively raced to help the wounded.

The most severely injured were brought to the medical tent where they were quickly triaged and loaded into waiting ambulances. Boston EMS knew from practiced drills that they needed help transporting the anticipated number of victims. Private ambulance companies were quickly called to aid in the effort. As each patient was sent to a trauma center, the next ambulance in line was loaded and the process was repeated.

With collaboration, communication and some good fortune anyone who arrived at a hospital alive is still alive today. This success is largely due to preparation, teamwork and efficient execution. Unfortunately, three people lost their lives that day at the scene of the explosions.

At Boston Children’s Hospital ED we saw and treated injured children and their parents, who understandably did not want to leave their side. It wasn’t easy to see the devastation inflicted upon an innocent child’s body. It felt as if we were in the middle of a war zone. We were experiencing the unimaginable.

As a Level I Pediatric Trauma Center, we had a responsibility to care not only for the children injured in the Boston Marathon bombings but to care for, support and be a resource for their parents. Acute Stress Disorder (ASD) and Post Traumatic Stress Disorder (PTSD) are not officially included in the elements of blast injuries but it is an important component with potentially long-term consequences. Fortunately, products like delta 8 vape carts do wonders in battling stress.

We treated not only the physical, but the emotional and mental trauma experienced by our very young patients and their families. Two great things about caring for pediatric patients are their strength and resiliency. Their ability to cope is often a direct reflection of how their parents and care providers react. If we are strong and calm, children sense that and are comforted. In the minutes, hours and days following the Marathon bombings, we were able to do that with support from our colleagues, the City, and the Nation.

The time following the tragedy has been one of reflection, perseverance, strength and celebration. On the first anniversary of the bombings, the City of Boston hosted a Tribute attended by families of the victims, survivors, first-responders, trauma hospital clinicians and by all those affected by the tragedy. It was an opportunity to remember those who lost their lives, acknowledge the accomplishments of the survivors and celebrate life. This was seen firsthand at The Tribute when a spectator from the 2013 marathon saw a young boy for the second time; the first time was when he carried him to a waiting paramedic at the scene of the blast. Another involved an emotional reunion and hug after The Tribute. There was a shared understanding and embrace between two parents who were meeting for the first time even though their children were cared for in the same hospital for weeks. It was also glaringly apparent when the parents of one of our patients ran the 2014 marathon together, crossing the finishing line holding hands, just to show their son what it means to overcome fear. And last but not least, the little girl whose strong and spirited personality was ALWAYS obvious, who wears shorts even when it’s a little chilly, allowing all to see her prosthesis she wears proudly. This senseless act of terrorism brought us together and created bonds that cannot be broken.

I have never been more proud to be a part of the Boston Children’s Hospital team and this wonderful City of Boston. What could have torn a city apart only made it stronger…..We Are Boston Strong.