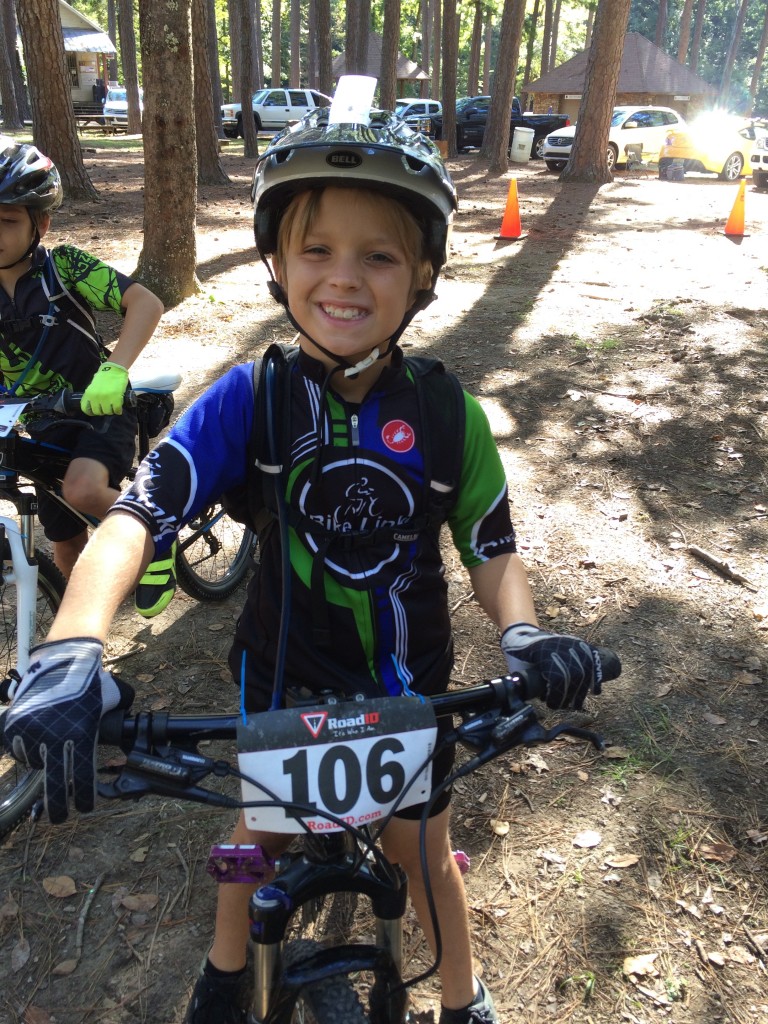 In 2014, our 8-year-old son Brayden “BB” raced motocross and he always wore top-of-the-line safety gear, including his helmet every time he was on the bike. We were about to begin training in the hopes of participating in the Loretta Lynn AMA Amateur National Motocross Championship. BB needed one more race to clinch a 2nd place finish in the Alabama State Championship Series in Motocross.

On October 18, 2014, our lives changed forever.  It was practice and he was working a section of the track, when something happened.  He went down on a jump, crashed, and fell on his head.  He did not move and was unconscious for at least 8-10 minutes. He began to posture and have seizures. The flight team arrived and stabilized BB in an ambulance before they could load him onto the helicopter. I was able to ride in the helicopter with BB and his level of consciousness continued to wax and wane during that long 45 minute flight to Children’s of Alabama, the only Level I Pediatric Trauma center in the state.

Upon arrival, the Children’s of Alabama Trauma Team took charge and we were separated from BB as they stabilized him. After a lengthy wait, they told us that BB had an area of hemorrhage inside the tissues of his brain.  It appeared a cluster of tiny vessels in the right hemisphere had ruptured causing some symptoms similar to a hemorrhagic stroke with decreased movement on his left side.  Dr. Jeffrey Blount, a pediatric neurosurgeon, explained to us that this was not a typical bleed.  He said if he had 1,000 patients with brain bleeds, 996 would be one of three types, but BB had that less than 1 percent type of brain bleed that was actually located inside the brain.

BB was at Children’s of Alabama from October 18 – October 30, 2014.  His care included speech therapy, physical therapy, occupational therapy, and a teacher from the hospital’s Sunshine School to help keep him up-to-date on his class work. The inpatient therapy treatment was a HUGE part of his recovery.  If it wasn’t for the Lord, Children’s Rehabilitation Team, Dr. “LaLa” (Dr. Paola Mendoza), our amazing family, and BB’s determination, I’m not sure we would have experienced this amazing recovery. Most importantly, we thank the Lord for bringing him through this crazy experience. BB experienced many behavioral and personality differences initially, which was very hard for all of us. The doctors said he may have to leave the hospital in a wheelchair, but BB was determined to walk out of the hospital, which he did with assistance of a cane on October 30, 2014. 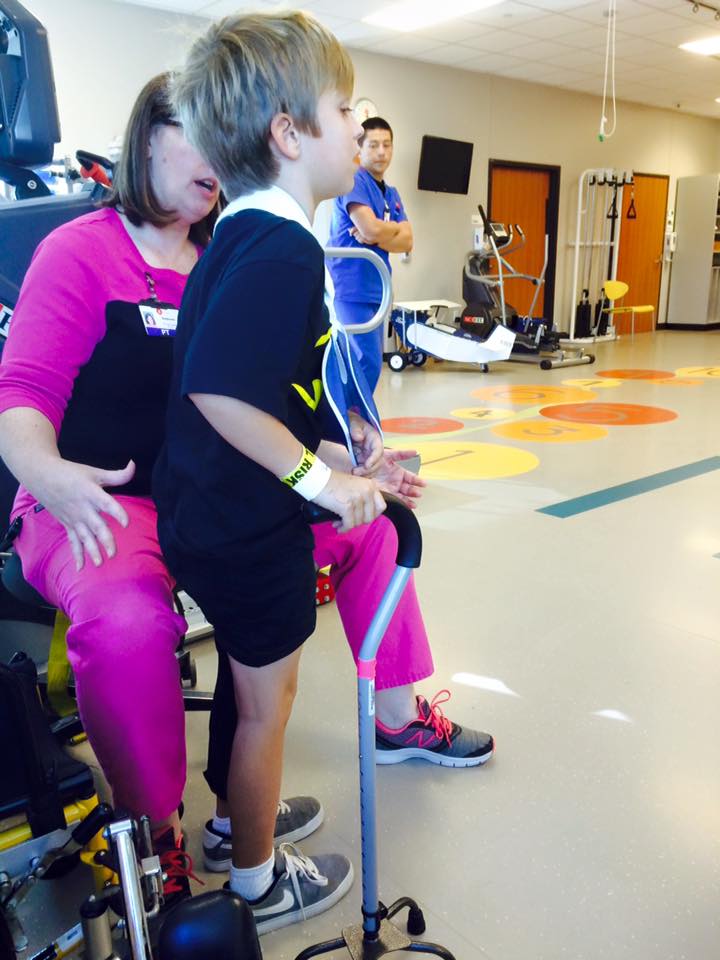 After he was discharged from Children’s, BB went to outpatient occupational therapy and physical therapy twice a week, continuing his recovery work with the most amazing rehab team at Children’s. BB also had a special test that determined that his injury was almost certainly the result of his fall and not a pre-existing condition. BB’s doctors raved over his recovery, saying things like “radical”, “ahead of the curve” and “amazing!”

In March, BB was still showing signs of “left-side neglect,” which means his brain doesn’t subconsciously talk to his left side, so we tried a different approach and put a cast on his right arm to force him to use his left. This helped but appears to be needed occasionally to remind him to use his left arm. With a 504 Plan, an Individualized Educational plan at school, and help from his wonderful teacher that came to our home to help him with classwork, BB was released to go back to school in January of 2015.  BB finished 3rd Grade with all A’s and the Principal’s Leadership award! 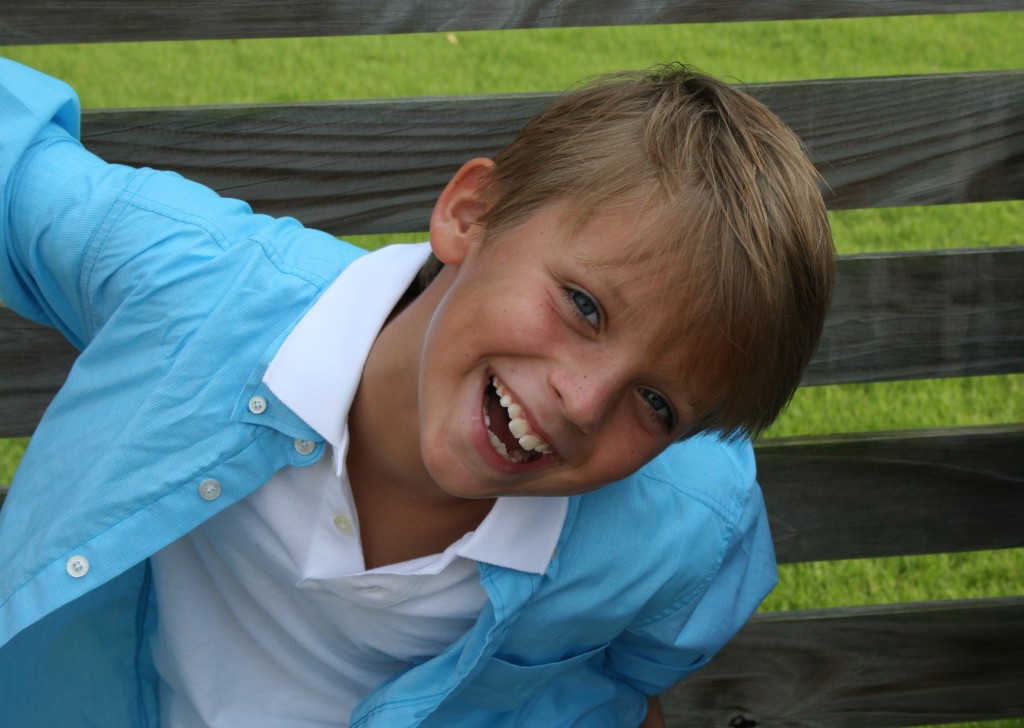 As of our June 2015 appointment, BB was released for sports and he now competes in bicycling and plays soccer. Although he has a disability, he plays with non-disabled kids and it is amazing how well they watch out for BB. He still suffers with the left neglect, but he makes a conscious effort to work on it (and mom & dad reminding).

We have seen some emotional differences along with the physical changes. BB falls easier due to lack of balance, his endurance is nowhere near the same that it was prior to the accident, and his motions are slower (it can take him five minutes to tie a shoe). Amazingly, he doesn’t get discouraged when he finishes last in a bicycle race; he just works harder to improve in the next race.

We are so thankful for the amazing care we received, from the amazing staff of medical professionals, the Special Care Unit and nurses at Children’s of Alabama, as well as our amazing family. BB got the care he desperately needed quickly because they all knew the severity of injuries and the best place for him to receive specialized pediatric trauma care. Throughout this process we learned there is a need for more pediatric trauma education to keep all of the EMS, paramedics, nurses and emergency caregivers up-to-date on the latest protocols and treatments so they feel confident about caring for an injured child.

BB’s outlook is awesome, he doesn’t let his disability get in the way and he doesn’t allow it to reflect on who he is today but how he can achieve whatever he puts his mind to. We thank the Lord every day that we have our son with us and that he can be an inspiration to others.