Many of us watch collegiate and professional football on television – highly trained athletes, running, blocking, and tackling at strengths and speeds that few can imagine. We are all familiar with on-field injury assessment at this level of play: an army of professionals specialized in management of sports injury running out to assess the athlete. The 100,000 athletes participating in collegiate football and 2,000 athletes participating in professional football sustain minor to severe injuries with premium quality care. Youth and high school football players are developing skills and coordination as they advance to each level of play; however the attention to athlete safety is often lacking.

Youth football participation has taken a hit over the last five years, possibly due to parental concerns about safety. The risk for injury in football is much higher than that of other youth contact sports, with 13 percent of youth football injuries classified as serious. Previous studies have shown that the incidence rate for concussions in players ages 8-12 is similar to those of high school and college football players. 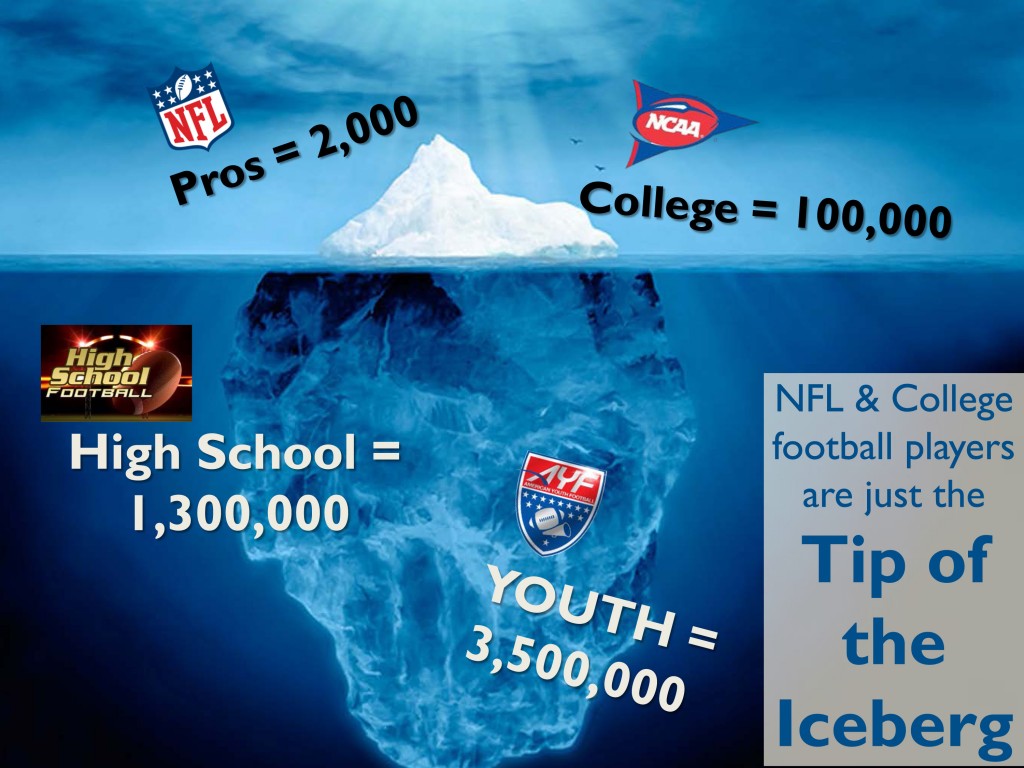 Despite these significant risks, most youth sporting events do not have medical personnel on the sidelines. Instead, some, but not all coaches are often required to undergo basic medical training in the hope they will be able to respond appropriately in the event of an injury or emergency. While many of the requirements are a step toward improving the health and safety of the athletes, this basic medical training provides a minimum safety standard and is not designed to train the coaching staff to appropriately respond to an injury.

Previous studies have demonstrated that the presence of a medical professional at youth and high school sporting events improves the identification of concussion and may subsequently reduce the number of concussions that are not reported or missed. It is standard for a certified athletic trainer to be present at all collegiate and professional levels of football. However, there is a need for increased support at the youth and high school levels.

A 2011 pilot study by the Virginia Tech – Wake Forest School of Biomedical Engineering of seven 7-8 year old football players in Blacksburg, Va., wearing accelerometers in their helmets for one season found that youth athletes received hits to the head that were similar in magnitude and frequency to those occurring in high school and college players. In 2012, our group received a grant from the Childress Institute for Pediatric Trauma to expand upon this research. The new protocol involved advanced brain imaging pre-season, post-concussion (if one should occur), and post-season. A local youth football organization agreed to participate. Because the study protocol required recognition of potential concussion injuries, the investigation team felt that the presence of an athletic trainer at the practices and games was necessary rather than relying on reports of coaches, parents, or inconsistent presence of parental volunteers with health care backgrounds.

Up until the 2013 season, referees, coaches, parents, and league representatives ‘managed’ injuries. This was the first time in the history of youth football in Winston-Salem, N.C., that a paid and trained medical professional was assigned to the management of youth injuries. In this youth organization, players were 6 to 13 years old. Five teams, with 20-30 players per team, practiced on separate areas of one football field; two other teams practiced 2 miles away at a local park. During both seasons, each team practiced 3 nights per week, with no more than 2 full-contact practices per week.

The athletic trainer was present at the main practice field and on-call for the two teams who practiced at the remote field. The athletic trainer’s time on-field was split between practices (6-8 hours/week) and games (8-9 hours/week) through the season. During practices, the athletic trainer would sit at the same location on the sidelines of the practice field with view of the teams practicing. During games, the athletic trainer would stand along the sidelines with the team that was currently playing, ready to assess injuries on both the home team as well as the opposing team. In addition to assessing injuries, the AT also suggested steps to make the playing environment safer, such as creating an emergency action plan and assisting individual players with conditioning, stretching, hydration tips, and other topics. 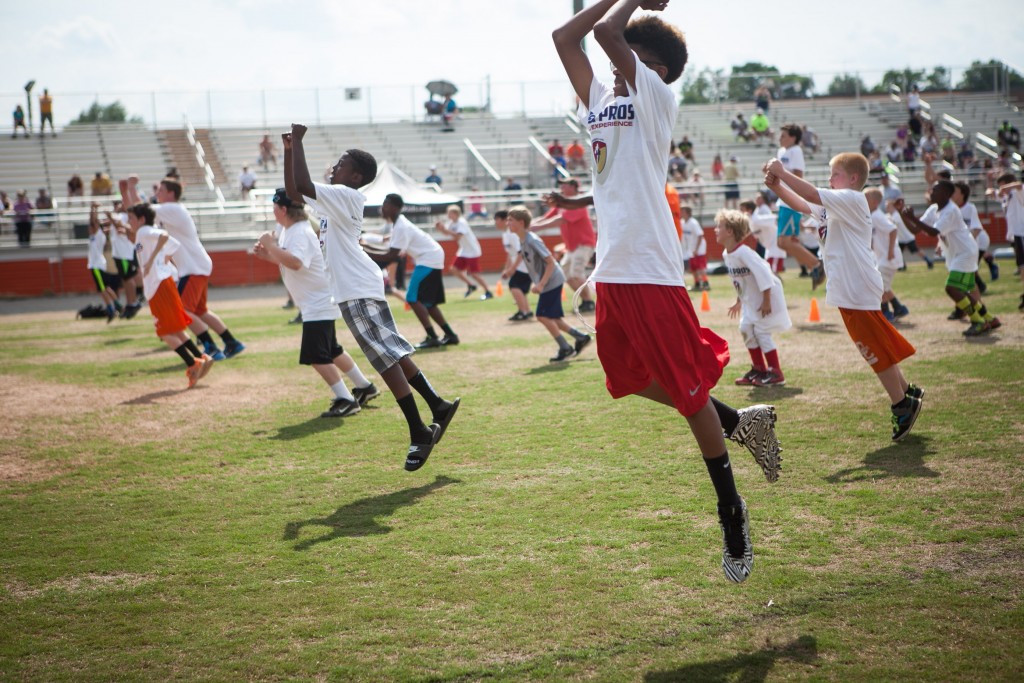 Injuries ranged from minor contusions and sprains to fractures and concussions. Although most injuries observed were minor, the emergency action plan was implemented eight times over the first two seasons and on more than one instance, the athletic trainer was compelled to cite the North Carolina Gfeller-Waller Concussion Law in order to explain to parents why their son was not allowed to return to play. While this law does not specifically include youth athletes, it does provide a best practice standard for concussion management. This highlights that even though there have been recent efforts to educate parents and coaches in concussion awareness, there is yet to be a full understanding of the importance of proper injury management, which can be provided by an athletic trainer.

In our experience for the past three football seasons, the local youth football organization found significant value in having an athletic trainer present at practices and games. Cost was a major obstacle and required assistance from charitable foundations, including the Childress Institute. Cost aside, this plan for youth football organizations is feasible, appreciated by parents, and may enhance player safety through improved injury awareness, prevention, and assessment. 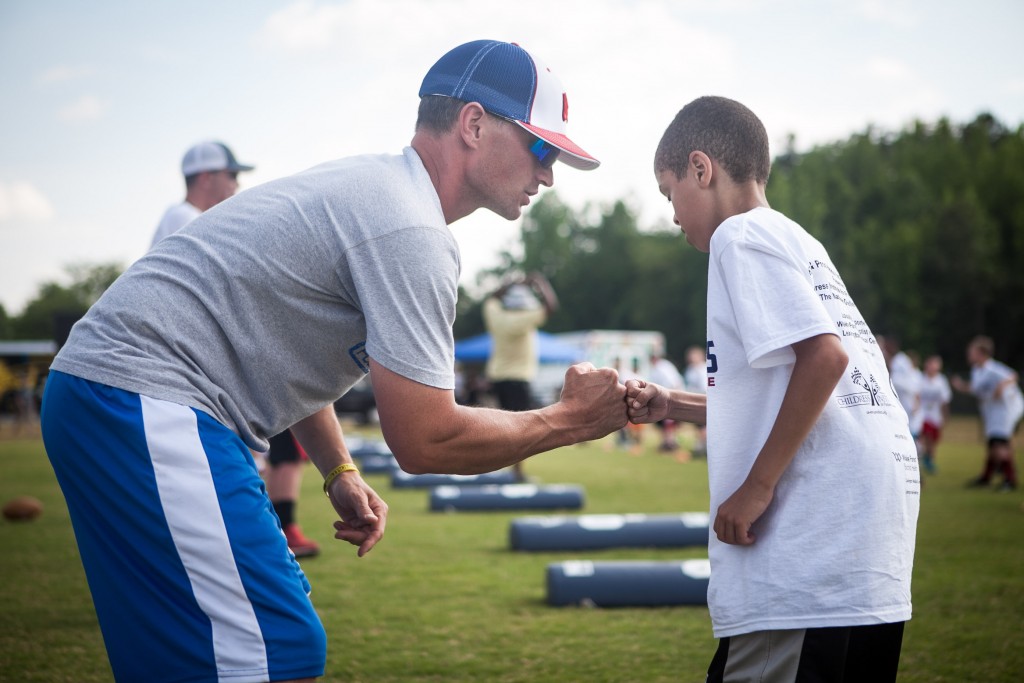 Learn more about certified athletic trainers from the National Athletic Trainers Association or the CDC’s Heads Up program.