I am an athletic trainer and work with the South Fork Panthers youth football league in Winston-Salem. The Panthers are part of the iTAKL concussion study led by Dr. Joel Stitzel at Wake Forest Baptist Health. I was hired to help report concussions if they happen during the study, but also as the team’s first responder to help with injuries on the field. My role is funded through Richard Budd and his family’s donation to the Childress Institute for Pediatric Trauma. 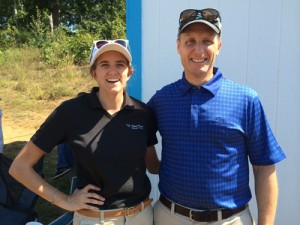 As part of my athletic trainer duties, I attended all three practices during the week and the games on Saturdays. There were normally seven games on each Saturday, so it was a full day.

The South Fork Panthers are a very competitive league. The kids range from 5 to 14 years old. Every team pushes for a high level of competition, and they are all full contact, even the 5 year olds. They’re taught to hit hard and hit well.

The coaches teach proper technique, making sure that when the kids do tackle they are using the heads up technique, and the kids are drilled on that day after day. They take the sport seriously which helps with injury prevention. They make sure the kids know how to play the sport in a way that’s going to keep them as safe as possible.

But, in any sport they play, kids will get injured. With football, there’s a greater likelihood, especially when you have that high level of competition and impact.

I’ve dealt with my fair share of injuries. Having an athletic trainer definitely helped the South Fork Panthers. On game days, I often dealt with injuries on the other team more than our own. 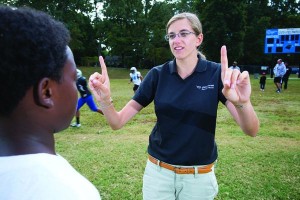 All of these benefits made a big difference with the parents and children in the South Fork Panthers’ league. They’re so open to the idea of making sure that their kids are safe, and they’re willing to take the advice of an athletic trainer. There were several times throughout the year when EMS had to be called. Because we had an emergency action plan in place, those incidents went smoothly. Everyone knew their role.

Other leagues are very interested in having athletic trainers, too. On game days I would make sure to introduce myself to coaches and let them know I’m available if one of their players was injured. Several times after a game, a coach or a parent would ask, how can our league get an athletic trainer? How do we get access to this? What would it take to have an athletic trainer? In many of these leagues, most of their staff and board members are volunteers, and they don’t have the money to hire an athletic trainer.

It’s great that the South Fork Panthers are able to be a part of the research grant and have access to an athletic trainer, but I hope we get to a place in youth sports where all kids can have the same access to care.